CHLOE WALKER
As interest rates rise and inflation grows, some are lamenting a possible knowledge and experience gap in the industry, with a considerable number of financial advisers having only ever known a low inflation environment.

How AMP plans to bounce back

JAMIE WILLIAMSON
AMP's chair has explained how the group intends to improve its financial performance, while Alexis George outlined how the 173-year-old company will be transformed, with a strong focus on the retirement space.

ANDREW MCKEAN
Kaplan Professional announced a record number of financial advisers have graduated from postgraduate financial planning qualifications in 2020 and 2021. As the cost of living increases and regulatory pressure adds to the cost of doing business, do you intend to charge more for your services? 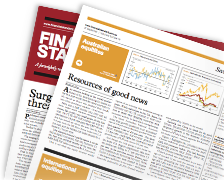